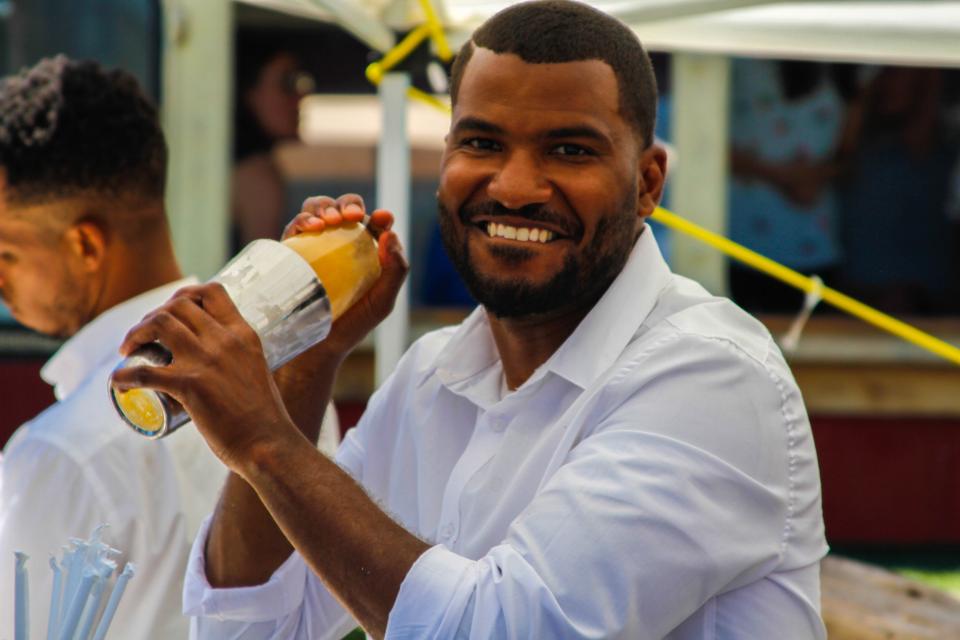 This week, I had the pleasure of interviewing Vicktor Stevenson, founder of Gourmonade. Gourmonade is a San Francisco-based gourmet lemonade mixology company.  In this interview, Vicktor talks about how he got started, his process for opening up his first lemonade kiosk, and the legacy he’d like to create for his family.

What inspired you to start Gourmonade?

I was born and raised in the Bronx, New York, and lived in New York City most of my life. In the middle of a typical New York City snowstorm, I was chatting with a friend about how I had a craving for freshly made lemonade. I think I subconsciously wanted a connection to summer, and I associated fresh lemonade with summer and warmer weather. But during the middle of winter, there wasn’t any fresh lemonade available. That idea of having fresh lemonade year-round stuck in my head. And, I decided to make it a reality with Gourmonade.

This business was a shift in what you had been doing career-wise as a barber. How did you get started working on Gourmonade?

As a barber, I fell in love with the discipline that it takes to hone a craft. I applied that same discipline to developing the recipes for Gourmonade. I began by taking classes to learn the art of bartending in order to apply concepts of mixology in creating the lemonade. And in 2016, I started to take business classes to develop the concept of Gourmonade and gain the business skills I needed. During that time, I also started to grow my following by doing pop-ups and catering events. The pop-ups and catering gave me a lot of insight into what people wanted and how they wanted it. For example, we found out that people wanted bottled lemonade at the events. It also showed me what I am capable of doing and opened up doors and opportunities.

My first pop-up opportunity was in 2016 at Impact Hub Oakland. That was a like a fight or flight moment. And, I’m still here fighting. Everything that could go wrong went wrong. I forgot some things. Traffic was bad (and I got caught in traffic even though I left home early.) I forgot how to tie my bowtie for a minute. I dropped some stuff.  Some stuff broke. I think I forgot the register and money, too. Pretty much everything that could go wrong went wrong that day. But, the main thing that went right is that I showed up and stayed in.

Despite all that, people were interested in what I was doing and enjoyed the experience. It’s always scary putting it out there for the world to see.After that,I felt a lot more confident in what I was doing. I created a stronger checklist of things to do before heading out the door and an inventory sheet. But, I definitely felt more confident and more solid for the next event.

You’ve come a long way from that first pop-up. Now, you’re in the midst of opening up your first location in San Francisco. Tell us about that.

Yes, we’re in the process of opening a kiosk this June. It’s a great location at 899 Valencia Street at 20thand Valencia near the park. We will be providing bottled Gourmonade made fresh daily. We’re starting with our Gourmonade Classic and Jasmine’s Palmer, which is a mix of lemonade and Javanese tea. And, we’re experimenting with a less sweet version of Gourmonade Classic.

Even though it will be bottled at the kiosk, it’s important to me that the bottles are made fresh daily. And, I feel more people want that. I don’t want to poison people with crazy preservatives or bore people’s tastebuds with watered down lemonade or overwhelm them with really sugary lemonade. I just want to give our version of what I think is best lemonade – great balanced lemonade that’s made from real ingredients and is fresh and ready to drink.

How did you choose this location?

I had been to the location over a year ago when it was a flower stand. I bought my wife flowers there. I had thought to myself this is the type of storefront for a lemonade kiosk that would have been perfect when I had the craving for lemonade in the middle of that snowstorm in New York.

The flower stand moved out.  And, I saw the location was vacant for a long time. That’s when the chase began.  It took me three months to even get a hold of the broker for the space. I must have called about 13 people to get to the broker. But, I stayed on it and got through.

What’s the process been like for opening up the kiosk?

The process has been just that — a process. It’s been a crazy, extreme process. If I haven’t learned patience by now, I don’t think I ever will. It’s a lot of work.  Because the kiosk used to be a flower shop, I had to go about getting a change of use. Back in October, I first went to the planning department to get that done and because I was given the wrong information, that delayed our whole process. That’s enough to set someone back and discourage them from continuing, especially when dealing with timelines.

I’ve practically lived at the planning department for months now.  Within the last two weeks, I’ve been there 13 days, as early as 7am to find parking and get my place in line. I just have to keep my eyes on the prize.

You’ve also had to raise money to open the kiosk. How did you approach your fundraising?

My mentor told me about a funding opportunity with Runway Project Oakland, a friends and family loan program for African-American entrepreneurs. She helped take me through the process. I had to update my business plan and numbers, present to the loan committee, and see what would happen.  That process was great.  It made me think about everything. It’s a “getting real” moment, especially when I was pitching in front of the loan committee. I gave my best pitch yet. I just put it all out there the best I could, and communicated clearly what I was trying to do – my vision and passion for what I want to do. And of course, it felt great getting the money!

On the heels of that, I launched a Kiva campaign. I was out of the private lending period on the first day, and completed the full raise in four days. I felt the love and support.

Raising money is a vulnerable state to be in because you’re never sure of people’s responses. But, you have to go out there and see. So far, people have really been super responsive and supportive.

Besides the money, what other support did you find in the process of raising money?

Runway Project Oakland gives all their borrowers access to weekly mentoring and bi-monthly peer support groups.  It has helped me by surrounding me with people who have done businesses before and are familiar with business processes.  Having a mentor on a weekly basis to chat with is incredible and super impactful. The loan itself has helped us get the business going, and is taking a lot stress off of coming out of pocket for things. It makes the business happen.

What has been the most challenging thing in your business so far?

What keeps you so focused and motivated?

Believing in something, and seeing it go from an idea in my head to something I can touch, see, and taste. And I can share with other people, and other people enjoy it. That’s pretty addicting and exciting.

Furthermore, I have a little one now, Legacy.  I want to leave a strong legacy for him. Just to show him that you can make it happen for yourself.

What advice do you have for people who are just starting their businesses?

Definitely call Uptima Business Bootcamp. There’s value in having someone to talk to who is knowledgeable. It helped me see things that I hadn’t thought about. Also, just believe in yourself and don’t quit.

You can find more information on Gourmonade’s gourmet lemonade mixology on Instagramand their website. Also, look out for the opening of Gourmonade’s first lemonade kiosk at 899 Valencia Street in San Francisco this June.